June 18, 2019
Back to Archive
We’re in a kind of civics education revival in America.

For too many years, civics education has in too many circles been seen as a kind of quaint afterthought. We’ve cut back the time and importance of civics in our schools. And we thought it wouldn’t really matter.

But what we’re all finding is that the core value of democracy is losing some hold. In a 2018 survey, the bi-partisan Democracy Project asked a series of questions about democracy and Americans’ attitudes toward it. While the overall numbers remain extremely strong, young adults feel less strongly about the importance of democracy than adults over age 29. Meanwhile, more than 70% of Americans think America’s system of democracy as “weak.”

We clearly have work to do.

There are some great programs in Delaware. The long-standing Boys State and Girls State programs – sponsored by the American Legion – continue to inspire high school students to get involved. (I attended Buckeye Boys State at Ohio University many many years ago – and still remember it fondly.) The YMCA Youth in Government program does the same. The University of Delaware continues to run a first-rate training program for high school civics educators in the state. 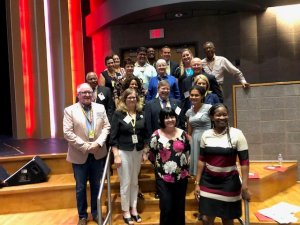 Now, there’s a new entrant on the scene. Project Soapbox is a creation of the Mikva Challenge – a Chicago-based nonprofit committed to strengthening civics education. DCF and the Rodel Foundation were pleased to co-sponsor the project this year – in which eighty Red Clay School District middle school students stood up and spoke on issues that mattered to them – from net neutrality to human trafficking to animal welfare and more. A few dozen interested adults helped judge. We’re thrilled that the Red Clay teachers wanted to bring it here, and thrilled we could be part of it. You can read more about it here.

Going forward, we will be looking for more opportunities to help strengthen civics education in Delaware. If you’re interested in helping, let me know.