This week, we learned the following:

New Castle County’s Route 9 Library and Innovation Center was named a finalist for the 2019 National Medal for Museum and Library Service. This prestigious award, given annually by the Institute of Museum and Library Services, is the nation’s highest honor recognizing museums and libraries for service to their communities. Congresswoman Lisa Blunt Rochester nominated the library for this recognition. 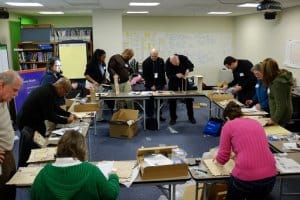 The Route 9 library rocks. But not just that one. Libraries up and down the state provide incredibly important services and incredibly valuable community building functions. Libraries host financial literacy classes, job search seminars, public briefings, art shows, children’s time, computer classes, movie screenings, nonprofit board meetings, knitting sessions; they serve as a place for children to go after school, for seniors to meet during the day.

To pick just one, the Lewes Library last year hosted over 1,000 free programs (including 6 for children each week) with over 20,000 attendees; and hosted over 100 organizations and groups conducted over 800 meetings in their community rooms. Check out the website of your library. You’ll be amazed who is there.

Libraries are the quintessential small-d democratic community institution. It’s where we all meet, where we socialize, where we learn and where we relax.

I just finished a tremendous book called Palaces for the People. It’s by Eric Klinenberg and it’s a discussion about the increasing polarization in America, and the need to find common purpose. To do that, Klinenberg emphasizes the importance of shared places. Front and center are libraries. The name of the book comes from a term used during the construction of the hundreds of Carnegie libraries in the country in the early 20th century. Palaces for the people.

One of my favorite quotes from that book is from a young man named Andrew who works at the New York Public Library. He’d previously worked at Starbucks, and here’s what he said: “At Starbucks, and at most businesses, really, the assumption is that you, the customer, are better for having this thing that you purchase. Right? At the library, the assumption is you are better. You have it in you already. You just sort of need to be exposed to these things and provide yourself an education. The library assumes the best out of people. The services it provides are founded upon the assumption that if given the chance, people will improve themselves.”

Here’s what the Delaware state libraries say: “When community social infrastructure including libraries – is strong – individuals AND communities flourish!”

While many of our long-time infrastructures are struggling, libraries continue to be strong.

And if you haven’t been to a library lately, stop by. It’s where we can be our best selves. And it’s where America meets.

Agencies receiving DCF grants must serve the state of Delaware and its residents without discrimination
based on race, religion, gender, age, disability, national origin, or sexual orientation.