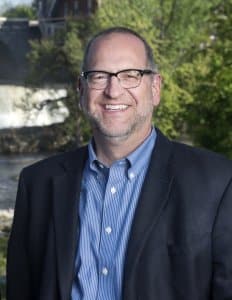 The Delaware Community Foundation (DCF) today announced the appointment of Stuart Comstock-Gay as President and CEO, effective the beginning of February. He succeeds Fred C. Sears II, who is retiring at the end of December after 13 years of service.

“Stuart Comstock-Gay, the current President and Chief Executive Officer of the Vermont Community Foundation, joins the DCF at a pivotal moment in our history,” said Marilyn R. Hayward, Chair of the DCF Board. “Stuart brings an esteemed national reputation fueled by a dynamic vision and passion as a proven leader with nearly 14 years of combined community foundation experience. The Board strongly believes his energy and insight are well matched to shape and guide the Foundation’s expanded mission focused on community engagement and civic leadership, while continuing to provide an expansive range of philanthropic services.”

“I am thrilled to be joining the Delaware Community Foundation as it embarks on an exciting new direction,” said Comstock-Gay. “The DCF has the potential to play a key role in the future of the state, and it’s an honor and a privilege to help lead that effort.”

Prior to his current position with the Vermont Community Foundation, he served as Director of the Democracy Program at Demos, Executive Director of the National Voting Rights Institute in Boston, Vice President and COO at the New Hampshire Charitable Foundation, and 14 years with the American Civil Liberties Union in Maryland at the start of his career.

Comstock-Gay holds a B.A. in Political Science from Bucknell University and Masters in Public Administration from the Kennedy School of Government at Harvard University. He and his wife, Lucy, have three adult daughters.

The highly competitive national search, which began in June of this year, attracted over 200 applications and was conducted by Kittleman & Associates, based in Chicago, IL.

Thomas J. Shopa, Immediate Past Chairman and current member of the DCF Executive Committee, will be the Acting President and CEO during the interim period before Comstock-Gay’s arrival in early February.